Adam Schefter reports that Jets rookie LB Jamien Sherwood suffered a torn Achilles on Sunday and will now miss the remainder of the 2021 season. 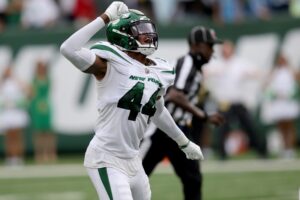 Sherwood, 21, started for one season at Auburn before foregoing his senior season of eligibility and declaring for the NFL draft. He was drafted in the fifth round by the Jets.

In 2021, Sherwood appeared in five games for the Jets, making four starts and recording 14 tackles and no sacks.

During his three-year college career, Sherwood recorded 141 total tackles, 8.5 tackles for loss, 2.5 sacks, one interception and 12 pass defenses in 37 games.