Ian Rapoport of NFL Media reports that the Jets are signing S J.T. Hassell off of the Patriots’ practice squad. 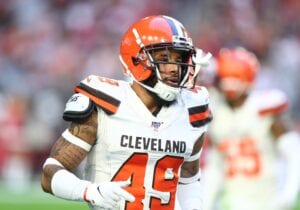 Hassell, 25, wound up going undrafted out of Florida Tech back in April of last year. He later agreed to a three-year, $1.71 million contract with the Browns, but was waived coming out of the preseason.

In 2020, Hassell appeared in four games for the Browns and recorded five tackles and no interceptions.