According to Adam Caplan, the New York Jets worked out three players on Tuesday.

Aaron Wilson of the Houston Chronicle reports that the Jets worked out free gent S Kelcie McCray on Tuesday.

McCray, 29, originally signed on with the Dolphins as an undrafted free agent out of Arkansas State back in 2012. He lasted just over a year in Miami before he was waived during the 2013 season and later claimed off of waivers by the Buccaneers.

Tampa Bay traded McCray to the Chiefs in August of 2014 in return for Rishaw Johnson. After re-signing with Kansas City, McCray was once again traded in 2015, this time to the Seahawks in return for a fifth-round pick.

In 2016, McCray appeared in all 16 games and recorded 39 tackles, no interceptions and a pass defense for the Seahawks. 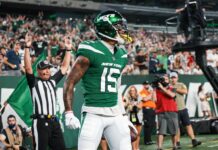