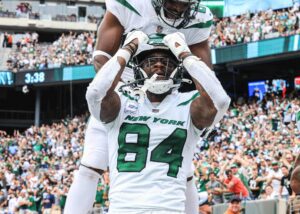 The procedure will knock Davis out for the remainder of the 2021 season. Expect the Jets to place him on injured reserve shortly.

Davis, 26, was the fifth overall pick by the Titans in the 2017 NFL Draft. He was in the final year of a fully guaranteed four-year, $25.39 million contract that included a signing bonus of $16.60 million when the Titans declined his fifth-year option.

Davis was testing the open market as an unrestricted free agent for the first time in his NFL career when he signed a three-year, $37.5 million deal with the Jets.

In 2021, Davis appeared in nine games for the Jets and caught 34 passes on 59 targets for 492 yards receiving and four touchdowns.