Tom Oates of the Wisconsin State Journal reports that Badgers DC Jim Leonhard informed Packers HC Matt LaFleur on Friday that he will not accept the team’s defensive coordinator job. 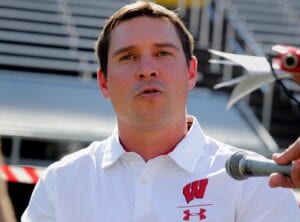 Leonhard was a finalist for the position and interviewed twice for Green Bay’s vacancy. However, Oates says Leonhard’s heart was at the University of Wisconsin and he wanted to continue coaching at the college level.

“It was me choosing UW. I want to stay at UW. I want to be at this level right now. Extremely flattered. Awesome opportunity. But it was not the right time for me to go back to the NFL,” Leonhard tells Oates.

The list of candidates for the Packers’ job includes:

Reports had said that it was Leonhard’s job if he wanted it but it appears as though the Packers will have to go in a different direction.

Leonhard, 38, placed 10 seasons in the NFL for the Bills, Ravens, Jets, Broncos, Saints, and Browns. He was hired as the defensive backs coach at Wisconsin for the 2016 season.

Wisconsin promoted Leonhard to defensive coordinator the following year and he’s remained in the position ever since.

I certainly don’t think I would have fired a proven coach like Mike Pettine, just to have a coin toss over a bunch of others, as in this scenario. 13-3 is a good season, and Pettine did as well as any, with what he had to work with. Had Pettine had one better corner to put out on the field, The Packers were off to the Superbowl. If I’m the Pack, I want to keep Mike Pettine around, and get him the necessary players. He will be back in a job very soon, and we’ll be trying to retrain a… Read more »