Tom Pelissero of NFL Media reports that Eagles DC Jim Schwartz will allow his contract to expire after Week 17’s game and take a year off from coaching. 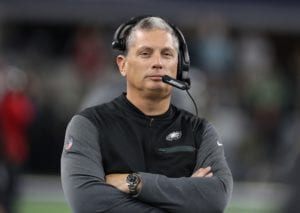 According to Pelissero, Schwartz has told people that he will contemplate retirement after a 32-year coaching career.

The Eagles previously approached Schwartz about an extension and is highly thought of by the team, per Pelissero. However, Schwartz has dealt with some health issues and has had multiple recent hip and eye surgeries,

Pelissero adds that Schwartz believes it’s the right time for him to step away from the daily grind, at least in the short term.

It remains to be seen what will happen with Eagles HC Doug Pederson, but it appears as though he’ll have at least one major coaching job to fill next year should he return.

Schwartz spent a year with the Bills and eventually joined the Eagles as their defensive coordinator in 2016.

During his five years with the Lions, Schwartz led them to a record of 29-51 (36.3 percent) including one playoff appearance.