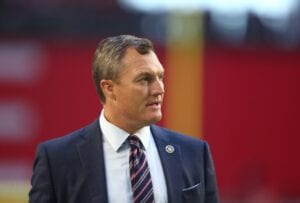 Marchand says Amazon could have tripled Lynch’s salary had he opted to return to television and left the 49ers.

Lynch is reportedly making around $5 million per year, but he declined Amazon’s overtures to remain the 49ers’ general manager.

Amazon has been aggressive in trying to put together a strong broadcast booth for their Thursday night games and has been in talks with Al Michaels and Troy Aikman.

Lynch, 50, played 15 seasons in the NFL for the Buccaneers and Broncos before retiring in 2007. He later worked for FOX Sports as an analyst before the 49ers hired him as their GM for the 2017 season.

During his time as 49ers’ GM, Lynch had helped to led the team to a record of 39-42, which includes two trips to the playoffs and one Super Bowl appearance.