Breaking news coming from both Michael Bush and Adam Schefter.  Bush tweeted that the Broncos will sign Justin Fargas and Schefter followed that up with his own tweet that Fargas will take a physical tonight and it’s “very likely” that a deal will be reached.

With the recent Lendale White singing, this would be the second running back that the Broncos have signed in the last week. Obviously Denver is concerned about the recent injuries to Knowshon Moreno and Correll Buckhalter. 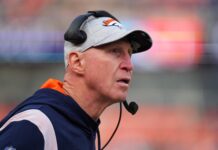