Looking at the current state of the Broncos running game, it would be safe to say that Fargas has a really good shot at making the team. Knowshon Moreno and Correll Buckhalter have both suffered early injuries and recent acquisition LenDale White has a 4-game suspension to serve leaving limited competition for carries. 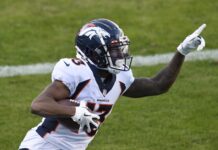