Zak Keefer reports that while things have publicly quieted down regarding trade talks for Eagles QB Carson Wentz, the Colts have continued discussions with Philadelphia. 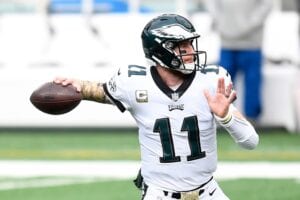 However, Keefer says the Colts haven’t really changed its offer from where talks started more than a week ago and are holding firm on what they would give up in a trade.

The Bears have been the other team significantly connected to trade talks for Wentz, but it appears he would prefer going to Indianapolis over Chicago for a variety of reasons. Les Bowen spoke with a source from another NFL team who says the Bears won’t trade for a quarterback who doesn’t want to be there.

Keefer points out that if that’s true, the Eagles will have little choice but to take whatever the Colts are offering, which appears to be miles away from their initial asking price of two first-round picks.

Philadelphia is reportedly in no rush to move Wentz, but he is owed a $10 million roster bonus due on the third day of the league year which will likely serve as a pseudo-deadline for a deal.

Although Fowler’s sources indicated that a deal could come “sooner than later,” the belief is that only a select number of teams are interested, due to the fact that Wentz is owed $47 million over the next two years.

The Eagles then signed Wentz to a four-year, $128 million extension going into the 2019 season that included $107 million in guarantees.

Eagles want 2 first round picks or a Matthew Stafford like deal for a guy they benched at the end of the season??? Yeah ok keep dreaming, go ahead and pay that bonus you owe him lmao