Jeff Howe and Aaron Reiss of The Athletic are reporting that the Texans have had “serious” trade talks with teams regarding QB Deshaun Watson and have continued to engage in conversations regarding the quarterback. 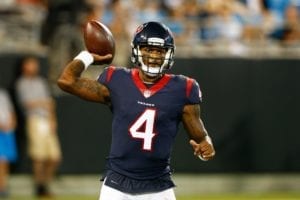 Even so, multiple sources have told The Athletic a Watson trade does not appear to be imminent at this time.

Sources with knowledge of the situation explained that it’s common for teams to attempt to drum up trade interest at this point in the year to increase the price for a player.

This got started Wednesday when John McClain and Mark Berman reported that the Texans are working on a potential deal to trade Watson to the Miami Dolphins.

The two added that the teams are optimistic a deal could be hammered out this week, otherwise they have until the NFL trade deadline on November 2.

According to The Athletic, the Texans have had recent trade talks with the Dolphins, Panthers and Eagles, but the level of seriousness regarding these discussions range from casual conversations to actual trade negotiations.

Houston is reportedly seeking three first-round draft picks and two or three more assets that can consist of players and/or picks.

It’s worth mentioning that Watson’s contract includes a no-trade clause, so he can direct a trade to some degree.

There was a lot of online speculation about Dolphins QB Tua Tagovailoa after the reports out of Houston surfaced, but sources indicated to The Athletic that the Texans have not shown interest in acquiring Tagovailoa.

The NFL is still investigating the allegations against Watson, who faces 22 active civil lawsuits accusing of him sexual misconduct and sexual assault. Watson has denied any wrongdoing.