Jason La Canfora of CBS Sports reports that the NFL league office is taking the email from Jon Gruden that included the racist trope about NFLPA executive director DeMaurice Smith seriously and are investigating the matter. 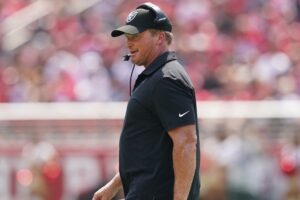 However, La Canfora explains that there are numerous factors involved in this situation such as Gruden not being a team or league employee at the time he sent the email to then-Washington president Bruce Allen. Beyond that, it came from a personal email account and Gruden claims he did not use a racist trope.

La Canfora’s sources have said that the Raiders made no immediate suggestion that Gruden’s job status was in any jeopardy.

According to La Canfora, sources close to NFL commissioner Roger Goodell believe a hefty fine and further diversity and inclusion training will be forthcoming for Gruden. However, La Canfora says a suspension is considered less likely.

In the event other evidence surfaces involving Gruden, La Canfora mentions that it likely would lead to “more intense punishment.”

Mike Florio of Pro Football Talk reported that while no one outside the league’s office is aware of the specific contents of the emails, a source tells him that there are a “number of off-color emails” between Gruden and Allen, but nothing else that includes racist language or tropes.

According to Florio, most of the discussion is centered around “mocking as incompetent specific owners and others in and around the league.”

Florio adds that at least one other person “whose name would be instantly recognizable” to people who follow the NFL closely sent and received similar emails from Allen, but there was no racist language or tropes in those messages.

The Fritz Pollard Alliance issued a statement saying they hope for fair and appropriate punishment to be handed down by the NFL.

“The insensitive remarks made by Jon Gruden about DeMaurice Smith are indicative of the racism that exists on many levels of professional sports,” executive director Rod Graves said. “Furthermore, it reveals that the journey for African Americans and other minorities in sports, is riddled with irrepressible mindsets at the highest level. It is our hope that the League and team ownership will address this matter with a remedy commensurate with these painful words. This is yet another inflection point in a society fraught with cynical social blinders, absent of respect for the intellectual capacity and leadership of minorities. When will it end?”

We’ll have more regarding Gruden as the news is available.