After the Lions were unable to lure Ken Whisenhunt to Detroit, reports indicated that Caldwell was now the favorite for the job. However, former Titans HC Mike Munchak was also being considered as well.

Lions were reportedly impressed with how Caldwell’s approach and preparation for their interview, as well as the way he worked with QB Matthew Stafford. Caldwell reportedly broke down all of Stafford’s throws in 2013 during his meeting with the team, which appears to have paid off in terms of convincing them that he was right guy for the job.

“I already had told [Lions GM] Martin Mayhew that Caldwell is a great match for a team that has the personnel of being capable of playing in the Super Bowl,” Dungy said, via ESPN.com. “I think the Lions were not only impressed with Jim’s interview but they were pleasantly surprised by the number of former Colts players who called on his behalf. Jim made Peyton Manning an even better quarterback — look at the numbers and wins — and I think he can do the same for Matthew Stafford.

“I know the Lions also want discipline and good character in the locker room. I’m not saying their other candidates can’t achieve those things, but those are Jim’s strengths with his background, especially from his influence under Joe Paterno at Penn State and hopefully in our program in the NFL.“

Before that he produced a record of 26-22 as the Colts head coach, which also included a Super Bowl appearance. His record is a little deceiving for the fact that it includes the Colts 2-14 season in which Peyton Manning sat out the entire year.

The Lions were clearly looking to improve their offense, and this hiring should definitely help them in that regard. 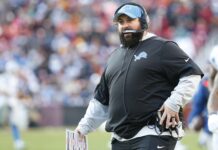 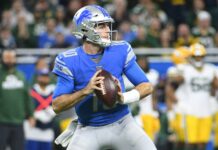