Brad Biggs for the National Football Post reports that the Detroit Lions are making a strong play for LB Stephen Tulloch and have offered him a contract with guarantees of at least $10 million.

Yesterday we heard rumors that the Lions were targeting Bengals CB Jonathan Joseph but they may have put those talks on the back burner while they pursue Tulloch.

Tulloch played under Jim Schwartz during his time at the Titans defensive coordinator. The Lions have been rumored to be interested in Tulloch for a number of months now and it seemed apparent that Tulloch was willing to leave Tennessee so the Lions just made sense.

This is by no means a done deal but there a chance that it could be done by the end of the day. 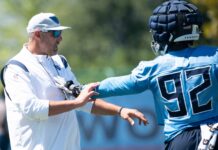