Matt Lombardo writes that 3-5 teams have reached out to show interest in veteran free agent DT Ndamukong Suh since the start of the regular season. 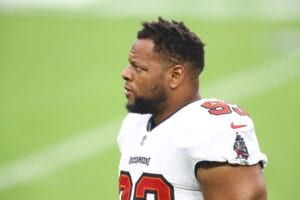 He adds, however, that multiple sources say Suh would consider returning if he was able to play for a Super Bowl contender and chase another ring.

Suh has been linked to multiple teams going back to earlier this summer. The Raiders appeared to be interested during training camp but at the time Suh’s asking price was another issue.

Suh, 35, is a former first-round pick of the Lions back in 2010. He spent five years in Detroit before signing a six-year, $114 million contract that included $60 million guaranteed with the Dolphins a few years ago.

Suh most recently signed a one-year, $9 million deal with the Buccaneers back in March of 2021.

In 2021, Suh appeared in all 17 games for the Buccaneers and recorded 27 tackles, six sacks, and one fumble recovery.