Cowboys HC Mike McCarthy explained his thought process that went into how he built his new coaching staff in Dallas.

“My view of building a staff is set the coordinators (first),” McCarthy said, via Jon Machota of The Athletic. “I believe in chain of command, so I wanted the coordinators to be part of the hiring process. … I think when you put together a staff, I think you look at it from my personal perspective of what I’m trying to build, but also I think you have to recognize the staff that the players were working with in the past. You had a lot of young coaches on offense. Experience was something I valued. I think that the experience in this league is something that in my opinion can really help develop players. I came from a program where we were going to be young every year. It was a draft-and-develop program. So the emphasis on having the patience and the understanding that you’re always developing that youngest player in the room because those are the guys that will be playing in November, December. So that’s a priority of mine when I’m establishing what we’re trying to do as a coaching staff, the personalities.

“I’ve known about Jason for a long time, not only through the general public as well-known as he is as head coach of the Cowboys,” Judge said. “There were guys I worked with that I came across in my career at both Alabama and at the New England Patriots that worked with Jason through their time in Miami with him. They consistently all reflected on how smart he is, how great a teacher he is and how his perspective of the game was through a different lens than most coaches. And when he sees it, he’s able to communicate it and paint that mental image to the players. And he does a fantastic job of making in-game adjustments.” 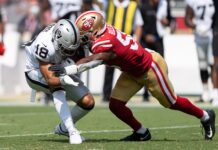