Rams CB Jalen Ramsey compared his versatility to that of Hall of Fame CB Charles Woodson.

“I like Charles because even though I say Deion is the best corner to play the game, Charles is the best defensive back to play the game because he played multiple positions in the secondary. He played corner, he played safety, he played nickel. He did a bunch of different stuff and he affected the game in so many different ways,” Ramsey said, via Rams Wire. “Me coming to L.A., that’s kind of the role that I started to be in. I’m still on the edges, on the corner the majority of the time, but here and there, they’re starting to let me be me a little bit more. Mix it in, playing a little bit of nickel. And then at some point in my career, if it takes me there to safety, I would want to do that as well. I want to have a mix of all.”

“I would say it’s stronger. I think me and Pete have gotten closer. Pete and I have always had a great bond but I think we had a great heart to heart,” Wilson said, via ProFootballTalk. “Me and coach Carroll’s relationship is stronger than ever.”

Wilson believes the Seahawks did well to upgrade this offseason and that his ultimate goal is to win another Super Bowl. 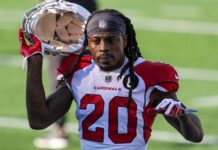