Bears’ franchise WR Allen Robinson said recently that he didn’t have any updates on his contract situation and would be comfortable playing out the season under the one-year, $17.8 million franchise tag.

“I don’t have any [contract] updates or nothing like that,” Robinson said, via Jeff Dickerson of ESPN. “That’s not in my control, if I don’t [get a long-term deal]. That being a possibility [of playing on the one-year franchise tag], then, I mean, that is what it is and I’m comfortable with that. Obviously, that’s a possibility. That’s fine. It is what it is. As I said before, my main focus now is continuing to be better and get better.”

Robinson cautioned to not put much emphasis on skipping OTAs and is comfortable with his personal routine.

“At the end of the day, [the offseason workouts] are optional things, and I think I have a pretty good routine I’ve been working through and progressing in certain areas at the pace that I want,” said Robinson.

Bears’ HC Matt Nagy is glad to have Robinson back at camp and was comfortable with the receiver missing OTAs.

“It was really good [to have Robinson rejoin the team this week],” Nagy said. “You guys know I have a really good relationship with A-Rob, and anytime you have that quality of player that shows back up and gets out here in the huddle and just that experience that he brings, he just has such a quiet calm and confidence to him that you can see the guys out there throwing him the football and the things he’s doing, he just slides on in. The one sneaky thing about A-Rob that I think is pretty cool is, No. 1, even if he’s not here, you know he’s working his tail off, and No. 2, he’s always in great shape, and we noticed that.”

Former Lions’ WR Calvin Johnson revealed that he was hoping to be released by Detroit during his NFL career. He has now seen QB Matthew Stafford get his wish to go to another team, and wonders why he wasn’t afforded the same luxury.

“We asked would they release me or let me go to another team,” Johnson told WoodwardSports.com. “They wouldn’t. You know what, it sucked that they didn’t let me go, but they let Matthew go, but hey, you know, it is what it is. I’m not back in the family with Lions or anything like that. It would be nice to if they try to resolve things, but that’s neither here nor there.”

Packers’ HC Matt LaFleur says that QB Jordan Love has been preparing to be the starting quarterback in Green Bay in the case that the team has to move on from QB Aaron Rodgers.

“It’s the same message it’s been all the time, is you’re only one play away, so you always have to prepare like you’re the starter,” LaFleur said during a press conference. “And just to be very intentional about the work that you put in. To go out there with a purpose. To be mindful and in the moment.”

It also appears that the Packers could end up moving on from veteran QB Blake Bortles or Jake Dolegala once they truly figure out who will be in the quarterback room in 2021.

“As we get closer to training camp and, you know, things could become a little bit more clear for us, you know, we could potentially make an adjustment there,” LaFleur said. 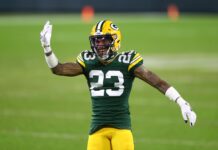