Packers QB Aaron Rodgers doesn’t want 2021 to be treated like a farewell tour.

“I don’t want a farewell tour,” Rodgers said, via ESPN’s Rob Demovsky. “I don’t know what’s going to happen after the season, but I’m going to enjoy it with the right perspective, for sure, and not look at it as I’m getting through this. I’m going to enjoy the hell out of all of it.”

Rodgers did say he wasn’t sure if last season was gonna be his last while he was playing due to the presence of QB Jordan Love.

“The reason I approached it like that is I just knew when the [Love] pick was made that the clock had started, for sure,” Rodgers said. “And I thought unless there was something in the season that really made me feel like I’m going to be here past 2021 that maybe this would be my last year. I didn’t want to be going into a year with some sort of … as a lame duck, like I said. I didn’t think that was fair to what I accomplished and what I mean to this team, and nothing really changed in that regard. I went into the offseason, that [it] could have been it.”

“I’m glad that I enjoyed every moment, I’m glad that I led exactly the way I wanted to lead and looked for those conversations with certain guys that needed a pick-me-up at different times. I took the headphones off and enjoyed the surroundings and the road trips and the time with the guys. Yeah, it’s a good template, for sure.” 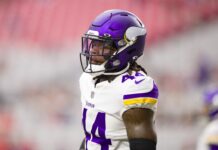