Sunday marked the conclusion of Cardinals WR Larry Fitzgerald‘s 16th NFL season. The 36-year-old veteran was named to the NFL’s 100th anniversary all-time team this year and has accomplished just about everything possible in his career aside from winning a Super Bowl. The chance of that might persuade Fitzgerald to come back for a 17th season to be a part of an Arizona team on the upswing.

“I’ve got to go through the checklist and process,” Fitzgerald said via Pro Football Talk. “But I love this organization with all my heart. I’ve given all I’ve had for 16 years. I just have to take a little time to figure it out.”

Rams S Eric Weddle signed a two-year, $10.5 million deal in Los Angeles this offseason to try and help the team get back to the Super Bowl. The Rams fell well short of that goal and Weddle believes the team will want to move forward with younger options at safety and take the cap savings.

“I’m not going to come back to be a backup, and that’s totally fine,” Weddle said via ESPN’s Lindsey Thiry. “That’s what I would expect them to do, and so, if that’s the case, then it will be it for me. . . . I think it’s a foregone conclusion. [Taylor Rapp, John Johnson], and we’ve got some good, young players. So, we’ll see. Nothing is set in stone, but I’ve had a great run. No regrets, baby.” 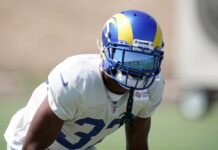