ESPN’s Adam Schefter is reporting that the Oakland Raiders will not pick up Tom Cables option for the 2011 season. Several media outlets suggested that this was the most likely scenario earlier in the week but we were all waiting on Al Davis to make it official.

The fact that Raiders offensive coordinator Hue Jackson has been contacted to interview for the San Francisco 49ers head coaching job may have increased the urgency for Davis to make a decision. 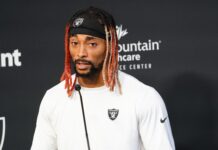