Cowboys VP Stephen Jones mentioned that WR Dez Bryant (foot) is “on target” to play in their Week 8 match up against the Seahawks.

“He looked good in practice and should do even more tomorrow,” Jones said. “It’s premature to say he’ll play Sunday, but he’s on target to play this weekend if this continues.”

Bryant was able to return an put in a limited practice on Wednesday.

“He’s a special player. Obviously I’ve watched a lot of film on him and what he’s capable of. Like I said, we’re happy to have him back and hopefully we can get some timing down over these next few days as we move into this weekend.”

According to David Moore of The Dallas Morning News, the Bears notified the Cowboys of their decision to release DT Jay Ratliff as a security precaution.

Moore’s sources stressed that Ratliff hadn’t made any specific threats against the Cowboys or anyone in their organization, but the Bears felt it was best to contact them anyways after how things played out in Chicago last week.

Ratliff was released after he was removed from the team’s practice facility and got into confrontations with several members of the team including GM Ryan Pace.

Raiders GM Reggie McKenzie said that he believes they’ve turned a corner as a team after compiling a record of 11-37 record over his first three seasons in Oakland.

“You knew you had to take the punches when you’re not winning,” McKenzie said of the first three seasons, via Vic Tafur of the San Francisco Chronicle.

“The key was really looking at the big picture, not get so down on myself and the team at that point knowing what was ahead of me. It wasn’t easy. I’m used to being in the playoffs. I haven’t been since I’ve been here. That’s the goal.’’

McKenzie said that he hasn’t been surprised at all with QB Derek Carr in their past five games.

“I’m never surprised with that guy,” McKenzie said. “He wants it bad. He’s a competitor. He’s smart. He’s going to find a way to get it done. … It’s good to know you have a quarterback you feel good about playing on Sundays.” 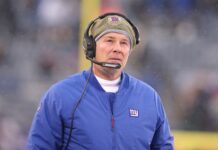 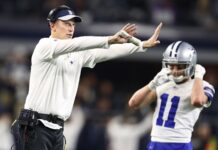 152,126FansLike
7,623FollowersFollow
237,944FollowersFollow
© NFLTradeRumors.co is an independent news source and has no affiliation with the National Football League (NFL), NFL.com, or any team(s).
wpDiscuz