Jason La Canfora of NFL Network reports that the Pittsburgh Steelers are considering moving up for Florida G/C Mike Pouncey to pair with his twin brother Maurkice. La Canfora mentions that head coach Mike Tomlin is “enthralled” with the idea of having the twin brothers anchoring the teams offensive line.

If the Miami Dolphins are as interested as some have suggested, it would basically take the Steelers out of contention for Pouncey but if he makes it past No. 15, Tomlin has given his front office an “edict” to trade up for him.

La Canfora mentions that Pittsburgh could hope that he’s available at No. 20 and look to move up then. 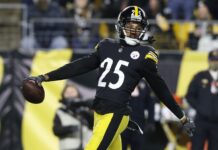