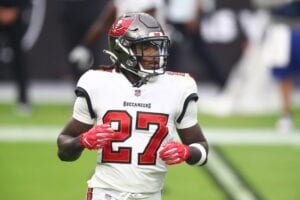 Regarding Jones, Pelissero explains that Leonard Fournette has been the Bucs’ starter and Giovani Bernard has been their passing down back, which has left Jones with a reduced role. The issue for Tampa Bay is that Jones is a solid backup and a decent insurance option should Fournette get hurt.

The same can be said of Mack, who is behind Jonathan Taylor right now. Mack previously requested a trade and the Colts are reportedly willing to work with him to find a new team. Although, Pelissero says the Colts have no plans to give Mack away to another team.

According to Jeremy Fowler, the Kansas City Chiefs have looked into the possibility of trading for Mack.

Jones is in line to be an unrestricted free agent in 2021.

In 2021, Jones has appeared six games for the Buccaneers and rushed for 118 yards on 31 carries to go along with three receptions for 33 yards receiving and one touchdown.

He missed all but one game of the 2020 season with a torn Achilles.

In 2021, Mack has appeared in four games for the Colts and rushed 25 times for 97 yards (3.9 YPC), adding two receptions on five targets for eight yards.