There’s just one week remaining in the 2021 season, meaning we have a pretty good idea of who will take home awards at the annual NFL honors ceremony:

The NFL awards aren’t announced until just before the Super Bowl, but this weekend marks the final chance for players to make their case on the field for voters.

At this point, things have been whittled down to the point that we have a fairly good idea of who will win each award. But some races are remarkably close for this time of year, close enough to be swayed by what happens in Week 18.

We don’t have a ballot here at NFLTR Review. But if we did, here’s who we would pick for each award:

Buccaneers QB Tom Brady has a really compelling case, especially if you look at some of the counting stats like yards and touchdowns. Brady leads the NFL in passing yardage and is on the verge of his second ever season with more than 5,000 yards. His 40 touchdown passes also lead the league and Brady is near the top in nearly all major passing stats.

This Tampa Bay team has also been riddled with injuries, especially on defense and especially late in the season. Brady has played a huge role in helping the Bucs overcome those with five game-winning drives and Tampa Bay is tied for the second-best record in the NFL at 12-4. You don’t have to work hard to sell the value of Brady, but consider that he’s relied upon more than any quarterback in football with 682 passing attempts so far. The next closest QB is Patrick Mahomes at 614 attempts.

I nearly talked myself into changing my mind on Brady just now. That said, Rodgers has been the most efficient quarterback in football and the Packers have been the best team in the NFL in a year where parity has reigned supreme. They haven’t had the toughest schedule, but they do have wins against the Cardinals, Rams and Bengals.

More importantly, Green Bay has been missing a number of its best players for all or most of the season. Rodgers hasn’t had LT David Bakhtiari all year and the Packers’ next-best offensive lineman, Elgton Jenkins, played just eight games before a torn ACL. The defense has been missing Za’Darius Smith and Jaire Alexander for most of the season. Regardless, Rodgers and the Packers have hummed along without missing a beat since a weird Week 1 loss to the Saints.

Rodgers also tops Brady, as well as every other quarterback, in a number of key metrics. He leads the NFL in adjusted net yards per attempt, touchdown percentage and interception percentage. In EPA+CPOE composite (expected points added and completion percentage over expected), Rodgers is clearly head and shoulders over the competition. 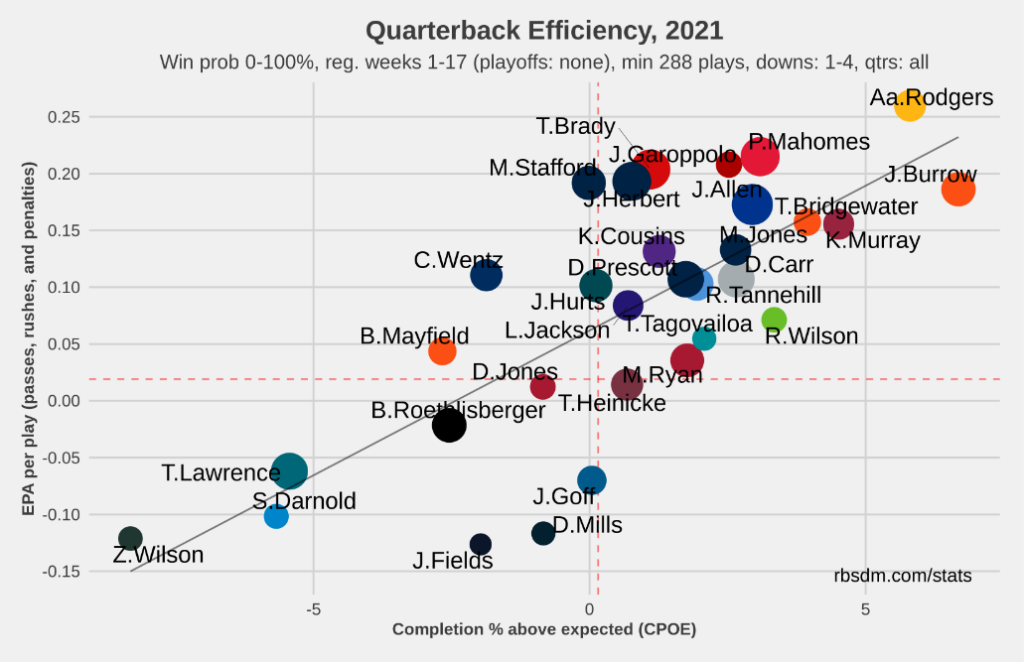 It’s not the end-all, be-all of metrics, but it does illustrate what other stats seem to show as well. There are plenty of quarterbacks playing well, but there’s a gap between Rodgers and the rest of the pack.

There’s another compelling case to be made for Colts RB Jonathan Taylor, as he forced himself briefly into the MVP conversation at varying points this season. He’s scored 20 total touchdowns and has more than 1,700 yards rushing, far away the top figure in the NFL. He’s having a truly phenomenal year and is a major reason for Indianapolis’ turnaround over the course of the season.

But he’s not on the verge of breaking NFL records like Kupp is, even if it is with the benefit of a 17-games schedule.

He’s already got more touchdowns than both Thomas and Johnson had in their respective years and both won OPOY.

It feels like Watt has been in the conversation for this award for a couple of seasons now. This might finally be the year he takes it home, though. Browns DE Myles Garrett has battled an injury and has lost momentum, with just two sacks in his past six games. Cowboys first-round LB Micah Parsons has been incredible, but it’s hard to look past 21.5 sacks from Watt, one away from tying the NFL record.

There’s a conversation to be had about Rams DT Aaron Donald, just like there is every single year. Donald remains one of the most dominant one-man wrecking crews in the sport. He’s been superb in 2021. Watt has just been a little bit better.

Chase has been locked in a back and forth battle all season for this award with Patriots first-round QB Mac Jones. And for a while it looked like Jones had pushed ahead. After a 201-yard outburst against the Ravens in Week 7, Chase went quiet — relatively speaking. He didn’t have more than 77 yards for seven weeks and had fewer than six receptions all but one of those weeks.

Meanwhile, Jones piloted the Patriots to a seven-game winning streak. But in the final game of that streak he infamously had just three pass attempts in a wind-swept win against the Bills. The next starts were losses and the door was reopened for Chase. He banged it down with his second 200-yard game of the season, going for 266 and three scores in a win against the Chiefs.

I understand why this award has been biased to quarterbacks in the past given their importance. Jones has been really solid for a rookie. Chase has been exceptional for an NFL receiver, period. You could make a similar argument for Chargers LT Rashawn Slater and Chiefs C Creed Humphrey even. But Chase is already one of the best receivers in the NFL. This award should be his to lose.

There really aren’t any other serious contenders for this. Parsons should win unanimously. He has a staggering 20 tackles for loss as a hybrid off-ball linebacker and edge rusher, plus a pass rush win rate that leads the entire NFL.

There are a ton of deserving candidates for this award this year. There was a lot of great coaching around the league (which was made clear by all the bad coaching we saw as well.)

In New England, Patriots HC Bill Belichick proved he hasn’t lost his mojo. The team picked up steam as the season moved along and are back to being one of the most physical, well-coached teams in the NFL. You have to be on your P’s and Q’s to beat New England, as they won’t beat themselves.

The Titans have dealt with a ton of injuries on both sides of the ball, yet they continue to defy expectations every single week. They’re a tough, physical outfit no matter who is playing and that’s a mirror image of their head coach, Mike Vrabel.

And after a 1-4 start to the season, Colts HC Frank Reich has the team all the way back to 9-7 and in the driver’s seat for a playoff berth if they can beat the miserable Jaguars on Sunday.

Out of all of these terrific coaches, though, LaFleur deserves to be recognized. Some of it is overdue, as LaFleur has Green Bay at 13-3 for the third consecutive year. It’s one of the fastest starts to a coaching career in NFL history. Having Rodgers helps obviously, but it’s not all that. Former HC Mike McCarthy had just one winning season in the three years before LaFleur took over. LaFleur deserves a lot of credit for maximizing Rodgers and adjusting to all the injuries that have hit the team this year.

For the first half of the year, Cowboys QB Dak Prescott looked like a lock for this award and a potential contender for MVP. But as Prescott has faded as the season has gone along, Burrow has picked up steam. In his last eight games, Prescott’s yards per attempt have fallen to 6.7 after being around 8.0 in his first seven.

Conversely, Burrow has thrown for nearly 1,500 yards in the past four games alone, with 11 touchdowns, no interceptions, over 10 yards per attempt and a completion percentage over 75 percent.

Quick-hit thoughts and observations from around the NFL…

It's pretty incredible that Brett Favre is second on the Packers in passing TDs, so I looked up who is second on every other team and how far behind Favre they are. pic.twitter.com/ddGCQXPO71

A fascinating peek into a bunch of franchises’ histories here. Since this was posted, Brady has tied for second in Bucs history…

A fascinating tidbit about franchise tags in 2022. The tag does not distinguish between off-ball linebackers and edge rushers, which means for years any time a tag has been used on an outside linebacker, they file a grievance to be treated more like defensive ends. But for the first time in what I have to imagine is ever, the linebacker tag is projected to be higher than the defensive end tag in 2022. Good news for someone like Titans OLB Harold Landry…

Speaking of salary differences, the top of the right tackle market has moved considerably in recent years. But across the board, there’s still a major difference in how teams prioritize the left side versus the right. So the point of the story is that Orlando Brown Jr. seems justified in forcing his way to a spot where he could play on the left side…

Meanwhile, in a universe not too far from our own, here are the current NFL standings if every single one-score game had the opposite result. pic.twitter.com/C3D5G0cbWt

Over time, one-score games in the NFL tend to gravitate toward being 50-50. Dramatic differences from that tend to indicate a team that’s particularly lucky or unlucky — and a regression to the mean the following year. That’s good news for the Bills. Bad news for the Steelers…

Before the coaching and GM cycle gets too crazy, this is a good read from the Ringer’s Kevin Clark on why there’s so much turnover each year and why it’s probably not going away soon…

Sometimes it’s helpful to be reminded we don’t really know how things are going to play out. Case in point, the table in this article from the Athletic’s Mike Sando on how free agent receiver signings panned out this year. The two best were Patriots WR Kendrick Bourne and Cardinals WR A.J. Green, both of which were widely panned as overpays when they happened…

T.J. Watt may be the sack leader but Myles Garrett is No. 1 in PRWR at edge.

This is one of the best charts ESPN’s analytics crew does. Very clearly shows who the biggest difference makers are…

Here’s the chart I really wanted to get to: putting Donald on the same plot as the elite edge rushers.

To do so I’ll throw out position: this is top 50 PRWR players regardless of where they lined up.

I’ll admit, I have a great appreciation for Steve Smith as a lifelong Panthers fan. But I’m still perplexed at how he failed to get a nomination as a finalist and longtime Texans WR Andre Johnson did. Their numbers are close but Smith feels like he has a slight edge…

Add in Smith’s success in the playoffs, his 2005 Triple Crown and how he helped redefine the position for shorter wideouts, and I just have a hard time seeing how the voters broke an admittedly close case with Johnson against him…