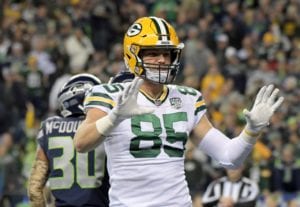 The move guarantees more money for Tonyan and gets it in his pocket sooner while creating a little bit of cap space for the Packers to work with.

The Packers later signed Tonyan to their practice squad towards the end 2017 season and brought him back in 2018 on a futures contract. He re-signed with Green Bay as an exclusive rights free agent each of the past two seasons.

Tonyan will be an unrestricted free agent in 2022.

In 2020, Tonyan appeared in all 16 games for the Packers and caught 52 passes for 586 yards receiving and 11 touchdowns.