Ian Rapoport of NFL Media reports that the Packers have claimed OLB Justin Hollins off of waivers from the Rams on Wednesday. 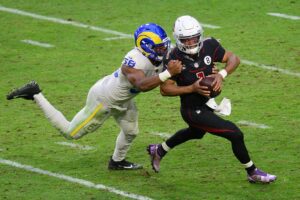 The Packers lost Rashan Gary for the season to a torn ACL, so they could use some additional pass rush help at this point.

The Broncos waived Hollins in 2020 and he was later claimed by Los Angeles. The Rams cut him loose on Tuesday.

In 2021, Hollins has appeared in all three games for the Rams, accruing 12 total tackles including one tackle for loss. Hollins also had two sacks including a forced fumble on the season.

Packers Have Made No Decision On Potentially Sitting Aaron Rodgers