The Green Bay Packers brought in free agent DL Ronald Blair for a visit on Monday, according to Aaron Wilson. 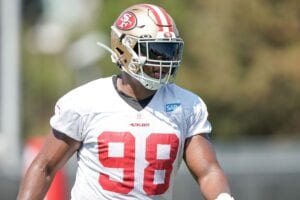 Blair was cut by the team last year a few weeks before he was scheduled to be an unrestricted free agent. He later signed with the New York Jets during the offseason and was on and off of their roster this past season.

In 2021, Blair appeared in eight games for the Jets and recorded 28 tackles, one sack and a fumble recovery.