According to Adam Schefter, Packers OT Jared Veldheer intends to play in 2020.

Veldheer came out of retirement to join the Packers late in the season and will be a free agent in a couple of weeks. Schefter says multiple teams inquired about him at the Combine last week.

Given how many teams need help at offensive tackle, Veldheer should receive a fair amount of interest, including from Green Bay.

Veldheer, 32, is a former third-round pick of the Raiders back in 2010. After four years in Oakland, Veldheer signed a five-year, $35 million contract that included $10.5 million guaranteed with the Cardinals in March of 2014.

The Patriots signed Veldheer to a one-year, $6.5 million last offseason but he retired a few months later. Vehldeer was claimed off of waivers by the Packers a few weeks ago after he came out of retirement and was released by the Patriots.

In 2019, Veldheer played in two games for the Packers. He received a 64.1 grade from Pro Football Focus in 98 snaps, which would have ranked him No. 49 out of 82 tackles if he had enough snaps to qualify. 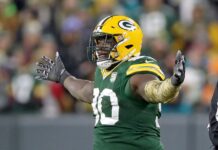 186,210FansLike
7,623FollowersFollow
279,809FollowersFollow
© NFLTradeRumors.co is an independent news source and has no affiliation with the National Football League (NFL), NFL.com, or any team(s).
wpDiscuz