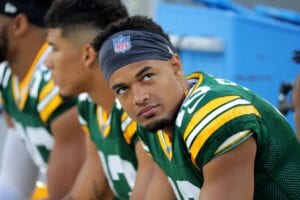 St. Brown, 24, was a sixth-round pick of the Packers back in 2018. He was entering the final year of his four-year, $2.6 million rookie contract when the Packers waived him coming out of the preseason.

Green Bay re-signed St. Brown to their practice squad after he cleared waivers. He’s been on and off of their roster this season.

In 2021, St. Brown has appeared in three games for the Packers and caught one pass for no yards.