Ian Rapoport of NFL Media reports that the Panthers had a second in-person interview with Colts RBs coach Scottie Montgomery for their offensive coordinator vacancy on Wednesday. 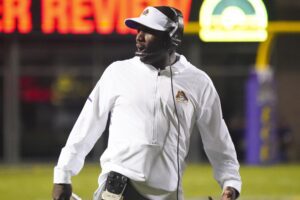 Rapoport says the first meeting between Carolina and Montgomery was virtual.

Montgomery, 43, began his coaching career as Duke University’s WRs coach from 2006-2009 and was hired to the same position with the Steelers from 2010-2012 before returning as Duke’s offensive coordinator for a few years.

He was East Carolina’s head coach from 2016-2018 and was hired to become Maryland’s WRs coach for two years. He signed with the Colts as its running backs coach in 2021.