According to Ian Rapoport, there’s a good chance Panthers QB Sam Darnold could win the starting job back to close out the season. 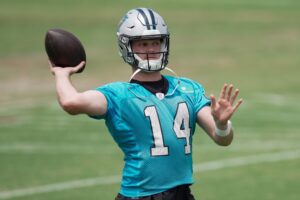 Darnold won’t start ahead of Cam Newton in Week 16 against the Buccaneers but Rapoport says the plan is for him to enter the game after a few series. If he plays well enough, he’ll stay in.

That could lead to Darnold starting over the final two weeks as Carolina tries to recapture the mojo it had with him at the helm for a 3-0 start to the season.

Darnold is due almost $19 million guaranteed because the Panthers picked up his fifth-year option, so Rapoport writes with him expected to be on the roster in 2022 regardless, it’s best for everyone to see if he can be a starting option.

As for Newton, Rapoport notes the Panthers still think he can be effective as a runner in the red zone and short-yardage situations. But his ability to push the ball downfield appears to be diminished.

We’ll have more on the Panthers QB situation as the news is available.