The Carolina Panthers are expected to name QB Baker Mayfield their Week 1 starter, according to Jeff Howe. 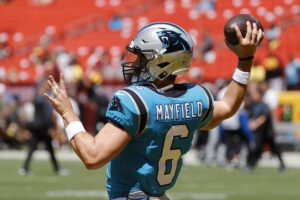 Mayfield has been competing with QB Sam Darnold for the job, but it appears he’s captured the starting role.

Carolina still has yet to formally announce a starter, although HC Matt Rhule indicated that the decision could be made by the time the team takes on the Patriots during their second preseason game.

If Mayfield is indeed named the starter, he would likely benefit from the added first-team reps between now and the time the team opens its season against the Browns.

The Browns exercised Mayfield’s fifth-year option which would have cost Cleveland $18.858 million fully guaranteed in 2022. However, Cleveland traded Mayfield to Carolina in exchange for a conditional 2024 fourth-round draft pick.

Cleveland agreed to cover $10.5 million of Mayfield’s salary with the Panthers paying out the rest.