According to Ian Rapoport, the Panthers are not expected to trade for Browns QB Baker Mayfield, if they trade for him at all, prior to the first round of the NFL Draft. 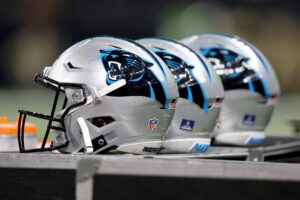 Cameron Wolfe adds he heard early on Carolina wasn’t interested in Mayfield, or 49ers QB Jimmy Garoppolo for that matter, early on when they became available because of the price.

However, the lack of interest in both has caused the price to come down and if the draft plays out a certain way, Wolfe notes the Panthers could trade for either veteran.

Wolfe adds there isn’t a consensus on how to proceed with the draft yet among the Panthers’ top decision-makers. The team is very open to trading back and picking up more picks on Day 2.

There is also a faction that wants to take an offensive tackle, with both Alabama’s Evan Neal and N.C. State’s Ikem Ekwonu high on their board. Others are ready to take a swing on a high-upside quarterback, perhaps Liberty’s Malik Willis.

Either way, there’s still time for Carolina to firm up its plans heading into Thursday.

NFL Scheduled To Meet With Deshaun Watson This Week