Field Yates of ESPN reports that the Panthers have converted $7.04 million of C Matt Paradis‘ $8.03 million base salary in 2021 into a signing bonus. 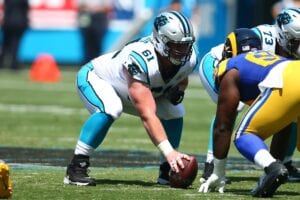 The Panthers cut three players on Friday, so they are clearly getting their cap in order for what figures to be a big offseason.

Paradis, 31, is a former sixth-round pick of the Broncos back in 2014. He was waived at the start of his rookie season and later signed to their practice squad.

Denver brought Paradis back on an exclusive rights contracts before re-signing him to a one-year, $2.914 million restricted deal. Paradis departed for a three-year, $27 million contract with the Panthers back in 2019.

In 2020, Paradis appeared in all 16 games for the Panthers, making 16 starts for them at center.