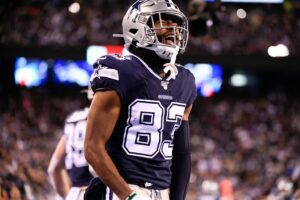 Bryant was been suspended without pay for the first two games of the 2021 regular season for violating the NFL’s Substances of Abuse policy this past June.

Bryant, 24, wound up going undrafted out of Temple back in 2019. He later signed a rookie contract with the Bengals but was waived a few months later.

From there, Bryant signed on with the Cowboys, but was waived in October of last year. He eventually caught on with the Panthers and returned to Carolina this past January on a futures contract.