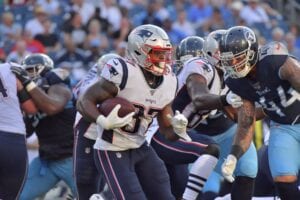 In 2019, Harris appeared in two games for the Patriots and rushed for 12 yards on four carries (3 YPC) and no touchdowns.

During his college career at Alabama, Harris recorded 477 rush attempts for 3,070 yards (6.4 YPC) and 23 touchdowns to go along with 52 receptions for 407 yards receiving (7.8 YPC) and two touchdowns.