Field Yates reports that the Patriots are signing WR Paul Turner to their 90-man roster and waived TE Troy Niklas to make room for him.

Turner, 25, wound up signing a three-year, $1.66 million contract with the Eagles as an undrafted free agent out of Louisiana Tech back in May of last year. He was on and off of the Eagles’ practice squad during the 2016 season.

Turner was once again cut loose coming out of the preseason last year and later waived from injured reserve with a settlement. The Saints signed him to a futures contract this past January but was waived last month.

During his college career, Turner caught 87 passes for 1,171 yards receiving and seven touchdowns for Louisana Tech over the course of 23 games.

Niklas tested the open market for the first time as an unrestricted free agent and signed with the Patriots to a one-year deal back in April.

In 2017, Niklas appeared in 15 games for the Cardinals and caught 11 passes for 132 yards receiving and one touchdown. 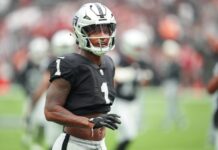