This is the second workout for Brooks after meeting with the Vikings last week.

Brooks, 25, originally signed on with the Lions as an undrafted free agent out of East Carolina back in 2013. Detroit decided to waive him but he was quickly picked up off waivers by the Seahawks a week later.

Brooks was on and off of Seattle’s practice squad for the next year before being released at the start of the 2014 season.

In 2013, Brooks appeared in one game for the Seahawks and recorded one tackle. 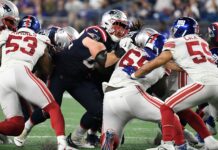