Mike Silver reports that free agent WR DeSean Jackson had a zoom call on Saturday with Raiders officials. Silver adds that Jackson could sign with the Raiders as soon as Monday, but there’s nothing finalized at this time. 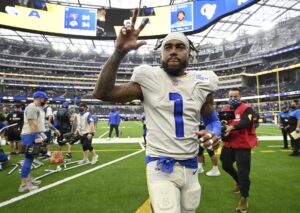 Earlier in the day, Mike Garafolo of NFL Media reported that there are around seven teams who have shown interest in Jackson.

Jackson and his agent are currently in discussions with these teams, but Garafolo says there is no rush from their perspective to get a deal done.

Garafolo explained that Odell Beckham Jr’s availability has or could impact Jackson’s situation, as teams with interest in Jackson likely also have interest in Beckham.

Jackson, 34, is a former second-round pick of the Eagles back in 2008. He spent six years with the Eagles before signing a three-year, $24 million contract with Washington back in 2014.

After three years with Washington, Jackson once again departed in free agency and agreed to a three-year, $35 million contract that includes $20 million guaranteed with the Buccaneers. He was set to make a base salary of $10 million for the 2019 season when the Bucs later traded him to the Eagles.

In 2021, Jackson has appeared in seven games for the Rams and caught eight passes for 221 yards receiving and one touchdown.