Jason La Canfora of CBS Sports reports that Raiders owner Mark Davis “begrudgingly” parted ways with HC Jon Gruden after the coach’s offensive emails were leaked last week. Davis initially opted to not punish Gruden, even though he had been made aware of the emails. 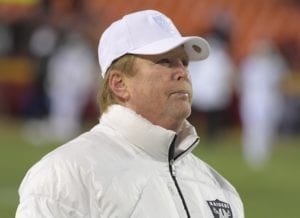 Since Gruden’s resignation, La Canfora says that Davis has turned his ire toward the league office and has mulled potential legal options against the NFL.

Beyond that, Davis has told others that he believes influential figures within the league office were intent on forcing Gruden out, which included calculated media leaks of the emails to pressure the team to part ways with him.

“He thinks the league office is out to get him,” a source who has spoken to Davis tells La Canfora. “He thinks it’s a hit job.”

The NFL has denied that they’ve leaked any emails.

La Canfora explains that Davis was “very emotional” during the meeting with Gruden. Davis reportedly wasn’t not seeking to terminate the remainder of Gruden’s 10-year, $100 million contract for cause at the time he resigned and it remains to be seen whether a settlement will eventually be worked out between the Raiders and Gruden.

According to La Canfora, Davis continued to support Gruden despite the increasing levels of scrutiny and he has been “livid” over the nature in which the emails were made publicly available.

Davis has also made the point that no Washington executives or officials have lost their jobs as part of the investigation into the workplace environment under Dan Snyder.

Sources around the NFL expect this situation to lead to some “fireworks at the upcoming NFL meetings in New York” later this month, as Davis is upset with commissioner Roger Goodell and his league office.