Field Yates of ESPN reports that the Raiders recently converted $12 million of DE Yannick Ngakoue‘s salary into a signing bonus and added three void years to the contract. 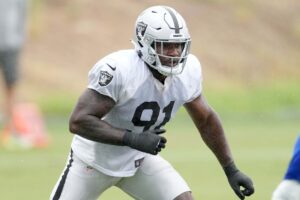 The Raiders needed some cap room after they signed LB K.J. Wright to a contract.

Ngakoue, 26, is a former third-round pick of the Jaguars back in 2016. He played out the final year of his four-year, $3.48 million contract before the Jaguars used the franchise tag on him last year.

However, Ngakoue refused to play for the Jaguars and they later traded him to the Vikings. He lasted just a few months in Minnesota before he was traded to the Ravens.

Ngakoue signed a two-year, $26 million deal with the Raiders this past March.

In 2020, Ngakoue appeared in 15 games for the Vikings and Ravens and recorded 24 tackles, eight sacks, four forced fumbles and a pass defense.