According to Jeremy Fowler, the Raiders are re-signing OL Denzelle Good to a two-year contract. 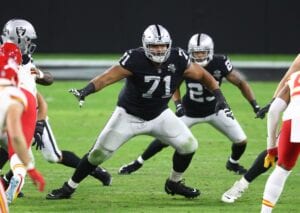 Good, 30, is a former seventh-round pick of the Colts back in 2015. The Colts elected to waive Good in December of 2018 and he wound up being claimed by the Raiders.

Good played out the final year of his four-year, $2,332,784 contract with the organization and has now re-signed on three consecutive one-year extensions with Las Vegas.