The Las Vegas Raiders announced that they have released LB Darron Lee from their injured reserve with a settlement. 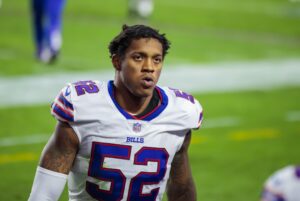 Lee will revert to the Raiders’ injured reserve once he passes through waivers unclaimed.

From there, the Jets traded Lee to the Chiefs for a sixth-round pick. He eventually signed on to the Bills’ practice squad late last season.

He signed on with the Raiders back in June but landed on injured reserve last week.