According to Aaron Wilson, the Raiders brought in free-agent OT Jordan Mills and G Patrick Omameh for workouts on Wednesday.

Mills, 29, is a former fifth-round pick of the Bears back in 2013. He spent two years in Chicago before among their roster cuts at the start of the 2015 season and later claimed off of waivers by the Cowboys.

From there, Mills signed a one-year deal with the Dolphins last year but was released with an injury settlement not long later. Mills had a brief stint with the Cardinals season before ending up on injured reserve.

In 2018, Mills appeared in all 16 games for the Bills and was rated by Pro Football Focus as the No. 70 offensive tackle out of 80 qualifying players.

Unfortunately, the Giants waived Omameh during the season and he later caught on with the Jaguars. From there, he signed on with the Saints for the 2019 season.

New Orleans re-signed him to a one-year deal in May but was among their final roster cuts coming out of training camp.

In 2019, Omameh appeared in 14 games for the Saints, making one start. 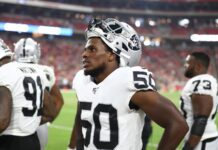