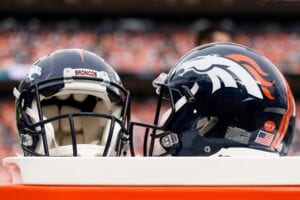 Evero, 41, was signed as an undrafted free agent by the Raiders out of UC Davis back in 2004 before returning to his alma mater as an assistant coach.

He then began his NFL coaching career with the Buccaneers as a defensive quality control coach before later joining the 49ers and Packers in the same capacity.

Evero was then hired by the Rams as their safeties coach in 2017 before being promoted to secondary coach and passing game coordinator in 2021.

In 2021, the Rams ranked 15th in points allowed and 17th in total yards allowed.

Stenavich, 38, is from Wisconsin and played six years in the NFL for a number of teams. He began coaching in 2012 as a graduate assistant at Michigan.

From there, Stenavich worked for Northern Arizona and San Jose State as their OL coach before the 49ers hired him as an assistant in 2017. In 2019, the Packers hired Stenavich as their offensive line coach.

We will have more news on the Broncos search for coordinators as it becomes available.