The Los Angeles Rams announced Friday that OLB Jachai Polite has cleared waivers and been re-signed to their practice squad. 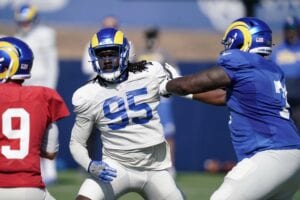 Polite, 22, was selected in the third round out of Florida by the Jets in 2019. Polite struggled during the pre-draft process, which led to him falling to the third round, even though he was considered to be one of the top edge rusher prospects.

He signed a four-year, $4,218,191 contract that includes a $1,118,194 signing bonus with the Jets. However, New York waived Polite coming out of the preseason and he later signed on to the Seahawks’ practice squad. Seattle released him after a few weeks and he caught on with the Rams.

In 2020, Polite has appeared in 11 games for the Rams and recorded three total tackles and one sack.