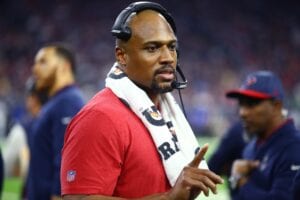 Weaver reportedly drew interest from the Jaguars for their defensive coordinator job.

Weaver, 40, is a former second-round pick of the Ravens back in 2002. He played seven seasons in the league for the Ravens and Texans.

Weaver took his first coaching job at Florida as a graduate assistant in 2010. From there, he joined the Jets as their assistant DL coach and had brief stints with the Bills and Browns before the Texans hired him as their DL coach. He was promoted to defensive coordinator last year.