Aaron Wilson of the Baltimore Sun has been doing a great job of tracking the players who have met with the Ravens for Combine interviews.

According to Wilson, the Ravens have met with:

Every team will meet with a host of NFL Draft prospects this weekend, but it’s just interesting to see what positions a team is a looking at whether or not some of these players would be available to them when they are on the clock.

Baltimore just recently lost a coin toss for the No. 16 overall pick, which means they will have pick No. 17 this May.

There is a chance that Kelvin Benjamin and Cyrus Kouandijo could be available to them at that point in the draft. It’s also interesting to see that they have met a number of running backs that figure to be available in the middle-rounds of the draft given the current situation involving RB Ray Rice.

We have the Ravens taking USC WR Marqise Lee at No. 17 overall in our most recent 2014 NFL Mock Draft. 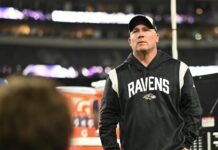