According to Jamison Hensley, the Ravens promoted OLB Steven Means from their practice squad to the active roster on Wednesday. 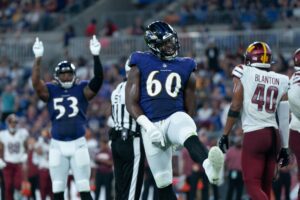 Means, 31, is a former fifth-round pick of the Buccaneers back in 2013. He lasted just over a year in Tampa Bay before catching on with the Ravens during the 2014 season.

Means had a brief stint with the Texans before the Eagles signed him to their active roster towards the end of the 2015 season. Unfortunately, Philadephia elected to cut Means loose coming out of the preseason in 2018 and he caught on with the Falcons a week later.

Atlanta re-signed Means on three consecutive one-year deals and signed on with the Ravens in June. He was among Baltimore’s final roster cuts and re-signed to the practice squad.

In 2021, Means appeared in 14 games and recorded 43 total tackles, two tackles for loss, and one fumble recovery.